On June 15, 1997, I suffered a ruptured brain aneurysm. The doctors only gave me a 5% chance to live, and they said that I would never walk or talk again.

After surgery, I was in a coma for 18 days After I woke up I went for extensive therapy at RIOSA in San Antonio, Texas I am walking and talking again I am also holding a job, which is something that they thought I would never do again.

It’s been tough but I know that I can do anything I set my mind to.

Then on June 15, 1999, the greatest joy of my life happened. I gave birth to our son TJ, after they told me that I would never have children. 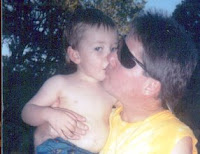 TJ has been a big help in my recovery. My husband Tom has been my rock.

Without the two of them I don’t know where I would be.

I may walk with a limp but at least I am walking. I am also driving.

The Lord is faithful.

Mail your donation to: